Pokémon Mystery Dungeon: Rescue Team DX – Episode 1: Waking Up on the Other Side

Willow the Sceptile is one of the main protagonists in Pokémon Mystery Dungeon: Rescue Team DX. She is Chamomile's partner and the co-founder of Team Rose Thorn.

Episode 1: Waking Up on the Other Side

On the outskirts of the Tiny Woods, Willow the Treecko found an unconscious Skitty and roused him. She was relieved to find him all right, though confused at his claim that he was human and his apparent amnesia. He remembers that his name is Chamomile, which Willow chuckles at before a frantic Butterfree comes by, worrying about her son Caterpie who fell into a fissure. At Willow's prompting, she and Chamomile head into the Tiny Woods to save him.

Chamomile's Fake Out makes quick work of most Pokémon in their path, whether asleep or awake, and with Willow's Quick Attack and Dragon Breath attacks backing him up, they reach the third basement without a scratch, finding Caterpie crying. They return him to his mother and receive thanks from both of them; when they leave, Willow asks Chamomile what he'll do next, and after receiving no response, leads him to a hut to live in and proposes to form a Rescue Team to help Pokémon like Caterpie. Chamomile refuses at first, but caves to Willow's begging and she gives him a red scarf to commemorate the occasion, donning a blue one herself. Chamomile chooses the name Team Rose Thorn and promises to do their best beginning the next day.

Excited about founding the team, Willow arrived at Chamomile's new home at dawn to wait for him, but dozed off. Chamomile woke her later that morning, and she chuckles and apologizes for falling asleep. After an exuberant exclamation to begin the rescue team, she sheepishly added that they didn't have any requests yet. She checked the house's mailbox and found the rescue team starter kit, including a badge and toolbox, but no requests. Promptly, a Pelliper arrived and delivered a message to the mailbox, requesting help for a pair of Magnemite stuck together in Thunderwave Cave. Chamomile declined the offer twice, but once again conceded out of a desire to earn Willow's friendship.

Arriving at the cave, they found two Magnemite waiting outside, who told them that their friends were in the sixth basement. Team Rose Thorn entered and had little trouble with the hostile Pokémon within; Chamomile spent a bit of time and stamina playing around with Willow, chasing her back and headbutting her gently, which also helped them practice maneuvering around each other. With this continued practice, they navigated through their opponents with ease, Willow often hanging back to pick up items or line up her Dragon Breath attacks. Almost halfway through, Chamomile grew to Level 6, and shortly thereafter, he gave Willow leadership for a bit. Chamomile took out a Poochyena as Willow approached it, allowing Willow to grow to Level 6 as well. Chamomile cautioned that they should be careful and Willow cautioned against female Nidoran and encouraged them forward.

It grew a bit difficult near the end as Willow ran out of Dragon Breath and Chamomile took a few hits, getting paralyzed by an Elekid and coming close to fainting with hunger on the final stretch. Willow took command, gently pushing Willow partway there and allowing him to walk on his own as they reached the sixth basement, rescued the trapped Magnemite, and returned home.

Willow confessed afterward that she was glad it had gone well but had been very nervous since it was their first time. Tired, she returned to the Overgrown Forest in the east, and Chamomile retired to his bed as well.

Willow found Chamomile up early by his mailbox, and upon learning that they had no requests, led Chamomile to Pokémon Square. After she gave a brief tour, they went to the Pelliper Post Office and accepted every job available on the bulletin board.

Team Rose Thorn spent the morning in Pokémon Square, taking advantage of the facilities. They reviewed dungeon basics at the Makuhita Dojo, reaping Makuhita's generous rewards, and then Chamomile redeemed a bronze ticket to run through one of the mazes. In 50 seconds, he managed to defeat two Shelgon and three Kingler, causing him to grow three levels to Level 9, upon which he declined to learn Sing. Choosing to save the other tickets for another day, they moved to the Link Shop. After some deliberation, they decided to link Willow's Quick Attack and Dragon Breath as an experiment. Finally, they finished preparing themselves, selling the Gold Ribbon from Makuhita to get a Shadow Ball TM that they stored for Chamomile to learn at a later date, prepared the toolbox, and deposited their excess items and money. With that done, they set out for the day's rescue mission.

They chose to accept the one request in Tiny Woods first, as that dungeon was currently providing high rewards. The dungeon offered no challenge, though Willow experienced some trouble with her linked moves due to Quick Attack's much shorter range than Dragon Breath. Nonetheless, they rescued the Plusle they came to save and, after fighting enough that Chamomile and Willow each grew a level, completed the dungeon. After receiving their rewards, Willow complimented them on their work that day, and they called it a night.

Willow arrived shortly after Chamomile awoke, and both of them were startled by the ground shaking around them. Diglett appeared moments later, having a wonderful time digging, and Willow gently warned him about causing trouble. Diglett apologized and left.

After some shopping at Pokémon Square, Team Rose Thorn went off to Tiny Woods, delivering a Tiny Reviver Seed to a Wurmple and getting a Carbos in return; Willow grew to Level 8 from the battles along the way.

The next morning, Willow arrived to find that Chamomile had received a rescue request, to her delight. Suddenly, the Dugtrio who issued the request appeared before them and asked them to go to Mt. Steel's summit to save Diglett before leaving just as suddenly. Though taken aback, Willow agreed that they should go and they quietly headed to the dungeon map.

Seeing the threat level of Mt. Steel, they elected to complete their waiting requests in Thunderwave Cave before taking on Skarmory. Willow grew to Level 9 through the battles they fought while escorting a Plusle to a Pidgey and rescuing a Poochyena and Elekid.

The next morning, Willow urged Chamomile that they should go to Mt. Steel to save Diglett. After a quick check of the mail, they did so. Dugtrio appeared abruptly at the entrance to tell them that the peak was the 9th level before leaving just as fast. After an awkward moment, they entered the dungeon. It progressed with relative ease, Willow growing to Level 10 along the way. At the peak, they battled Skarmory after Willow tried and failed to make it listen to reason; Willow's Dragon Breath gave them an early advantage through paralysis and the fight ended with little difficulty. At a loss for how to rescue Diglett afterward, the team got the help that they needed when the two Magnemite that they saved in Thunderwave Cave arrived and carried Diglett off of the cliff he was trapped on.

Back at the base, Diglett thanked them, and Dugtrio appeared to offer the same gratitude to Team Rose Thorn and the two Magnemite. After they left, Willow asked one of the Magnemite if they wanted to join the team, saying that they couldn't have done the previous job without them. Chamomile objected to this, and when Willow prompted him, he said that he could fly, but was unable to show Willow. The Treecko indignantly asked if he was making fun of her, which Chamomile's amusement only confirmed. Shaking that off, she repeated the offer, but although Magnemite expressed interest, it had to decline due to a lack of a nearby place to stay. After they left, Willow suggested to Chamomile that they check out the Camp Corner in Pokémon Square the following day.

Emile spent several minutes off-screen debating his partner Pokémon from the 13 options available; he wanted to choose something good but interesting to watch, which ruled out Mudkip, as well as an option he was unlikely to be able to use in a future LP, which ruled out Charmander and Squirtle. He ultimately decided on this unorthodox Grass-type, which is lightning-fast, a heavy hitter, focuses more on draining foes' HP than inflicting them with status conditions, and has Dragon Breath as a starting move, a ranged attack that few Pokémon resist.

Initially, Emile planned on not giving Willow a nickname, but everyone he spoke to before the LP dissuaded him and encouraged him to insert his creativity into the adventure. Willow is a female name that comes from willow trees, which Emile thought was appropriate for a wood gecko.[1] 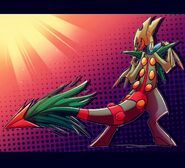 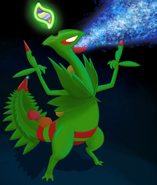