Pokémon Mystery Dungeon: Rescue Team DX – Episode 1: Waking Up on the Other Side

Episode 1: Waking Up on the Other Side Edit

After rescuing a Caterpie that fell into a fissure in the Tiny Woods, Willow the Treecko proposed the idea of forming a team to his new companion, an amnesiac Skitty named Chamomile. Chamomile initially refused but conceded to Willow's begging, and she gave him a red scarf while donning a blue one to commemorate the occasion.

The rescue team's starter kit arrived in the mail at Chamomile's new house the next morning, and shortly afterward, a request arrived regarding a pair of Magnemite stuck together in Thunderwave Cave. Though Chamomile was reluctant to accept, he again conceded to Willow, and the pair of them completed the request with ease.

Chamomile and Willow accepted all of the rescue requests available on the Bulletin Board and then spent the morning preparing themselves in Pokémon Square. They chose to take on the one request in Tiny Woods and completed it easily, rescuing a Plusle on behalf of a Minun. 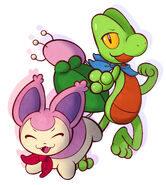 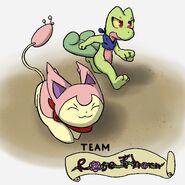 by @deaddufuss on Twitter[3]
Add a photo to this gallery

please give pollockson a page

Retrieved from "https://emile.fandom.com/wiki/Team_Rose_Thorn?oldid=42678"
Community content is available under CC-BY-SA unless otherwise noted.