Chuggaaconroy Wiki
Register
Don't have an account?
Sign In
Advertisement
in: Characters the Chugga Named, Pikmin, Allies,
and 11 more

Pikmin - Day 1
Steve the Trooper, or simply Steve, is a recurring character in Chugga's LPs. He first appeared in "Day 1" of Pikmin. Steve is usually the one brought up by Jon to mess with Emile.

He used to be a normal Red Leaf Pikmin that always tripped over and had a hard time keeping up with the group until Olimar arrived on PNF-404.

Steve decided to show his true colors by trying to bring a dead Fiery Blowhog back to base all on his own. He was then saved by Chuggaaconroy before the sun went down. Chuggaaconroy, pleased with Steve's bravery, gave him the title 'Trooper', And in another day, he wanted to be a trooper again but Chugga whistled him back. From that moment on, Steve's popularity was boosted through the roof. Fans even made a Facebook page for Steve.

ProtonJon decided to mention Steve to annoy Chugga, as he had failed his mission of getting him to use a "Continue". Steve was also mentioned, intentionally or unintentionally, in New Super Mario Bros. Wii - Episode 5, World 3-2 TheRunawayGuys were talking giving random names to the Goomba of the beginning of the level where Steve got brought up as a name. Chuggaaconroy began to immediately freak out over the mention of Steve.

When Chuggaaconroy returned to the Distant Planet in Pikmin 2, he refused to call Steve by name; however, he had the honor of carrying back Louie in the final episode, Pikmin 2 - Finale.

In The Subspace Emissary Olimar was attacking a giant R.O.B. Captain Falcon then appeared taking out R.O.B but accidentally took out all of the Pikmin except Steve much to Chugga's dismay. Later in that episode, Jon stole his controller, forcing him to be Olimar, the last Pikmin Chugga plucked happening to be Steve. Later in the Great Maze, when the group came across Olimar, Jon made the joke of Cyber Steve, and impersonated the Terminator. Emile was unimpressed by that. The Trooper helped his fellow Pikmin and the other heroes take down Tabuu and the Subspace Army.

The Legend of Zelda: Majora's Mask

Chuggaaconroy said that Steve had stopped being funny after his LP of Pikmin.

There was a red leaf sitting near the bridge pieces, as well as one that wasn't able to push the box, tempting Chuggaaconroy.

There was a red leaf that was left behind near the beginning of the day.

This is ironic because the medallion featured a FLOWER pikmin (Steve is famous for simply being a LEAF Pikmin).

When Pikmin came up for a TRG LP (as a blind LP for Jon), Jon named the first Red Pikmin he came across Esteban, which is Spanish for Steve.

Come Day 11, after killing a Fiery Blowhog (the same enemy whose corpse helped create the Steve memes), Emile admitted he knew why Jon went with Esteban (thanks partly to being part-Mexican as Esteban is Spanish for Steve). He admitted that he was purposefully ignoring it because he thought it was funny. It wasn't until Jon got worried about Emile's lack of reaction that this revelation came out.

Steve rushing into battle whilst Bob and Joe stand behind Olimar. 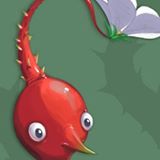