The Potted Piranha Plant[1] is an item in Mario Party 3 and Super Mario 3D World.

Potted Piranha Plants are the focus of the minigame Storm Chasers. The in-game text described the rules as "Hold your pot under the rain cloud to water your Piranha Plant! The more you water it, the more it will grow!".[2]

The silhouette of a Potted Piranha Plant was seen on the overworld of World 2.

In World Crown-Crown: Champion's Road, Mario accidentally stomped on a Potted Piranha Plant whcih he intended to pick up. Later, the heroes skipped over attempting to pick of the plant. 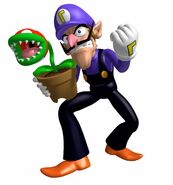 Retrieved from "https://emile.fandom.com/wiki/Potted_Piranha_Plant?oldid=36438"
Community content is available under CC-BY-SA unless otherwise noted.