The Legend of Zelda: The Wind Waker - Episode 1

The Legend of Zelda: Majora's Mask

Link (Link's Awakening DX and A Link to the Past)

The Legend of Zelda: Skyward Sword

The Legend of Zelda: Skyward Sword - Episode 1: The Start of a Legend

Alive (and recombined into one)

Alive (and recombined into Blue Link)

The Legend of Zelda: Tri-Force Heroes

Link is the main protagonist of The Legend of Zelda series, through various incarnations.

Link is also one of the playable protagonists in The Subspace Emissary of Super Smash Bros. Brawl.

The Legend of Zelda: The Wind Waker

Link is played by Emile in this Let's Play. In the game, there is also a pig named Link who lives on Outset Island.

Link is introduced as a young boy living on Outset Island. His younger sister, Aryll, brings him a telescope for his birthday.

Link trained with Orca in the art of swordplay. After training, Orca gave Link a Hero's Sword.

The Legend of Zelda: Majora's Mask.

Link was assaulted and transformed into a Deku Scrub by Skull Kid, accompanied by Tatl and her brother Tael. Tatl was separated from the two and eventually joined Link on his quest to stop Skull Kid from destroying the world, and to be reunited with Tael.

Link encountered Captain Keeta sleeping in the Ikana Canyon. Link played the Sonata of Awakening and Keeta awoke, breaking the stone structure under which he was sleeping. Keeta hobbled off and Link, with his Bunny Hood on, chased after him. Keeta summoned Stalchildren and fire traps to slow down Link, but Link caught up. the two fought, but Link won using his Gilded Sword. Keeta fell and surrendered. Later, Keeta and Link discussed. Keeta told a war story about his crushing and humiliating loss. Keeta saw Link as worthy and gave him the Captain's Mask in order to help him on his quest. Having relinquished his soul in giving Link the Captain's Mask, Captain Keeta died.

Link encountered the undead King Igos du Ikana in the Ancient Castle of Ikana. He was protected by the King's Lackeys, his personal bodyguards. Link fought the three of them and ultimately won, earning Link the Elegy of Emptiness.

Link was sailing through the sea, when he encountered a storm and was shipwrecked. He awoke on a mysterious place called Koholint Island. He met a girl named Marin and her father Tarin. Link then explored Mabe Village and realized he has lost his sword. Link explored the beach and found his sword.

Link explores more of Koholint Island in search of Tarin, who has gone missing.

Link explored the Tail Cave. As Link neared the end of the Tail Cave, he encountered Moldorm. Moldorm and Link faced off over a foreboding pit. Despite Moldorm's reasonably intimidating appearance, Link defeated him in a pathetically easy fight. Moldorm exploded, leaving Link a Heart Container. Moldorm's death allowed Link to secure the Full Moon Cello.

After Link had neared the end of the Face Shrine, he met a villainous, disembodied face named Facade. After a fiercely fought battle, Link ultimately killed Facade. Facade's death allowed Link to acquire the Coral Triangle. Later at Mabe Village, Link used his newly acquired Power Bracelet to open the Flying Rooster's tomb. Link then used his Ocarina to bring the Rooster back to life. The Rooster awoke perfectly healthy and he joined Link on his adventure.

Link, now joined by the Flying Rooster, set out on his quest to travel to Tal Tal Heights, as the suggestion of the Owl. They met the Mad Batter, and he doubled how much Magic Powder Link could carry. The Rooster and Link then travel to Martha's Bay, and summoned the Mad Batter once more. The Mad Batter doubled how many Bombs Link could carry. Link and the Rooster then visited the Wind Fish's egg. The pair then continued to travel Koholint, in search of more upgrades before they continues their quest for all Eight Instruments to wake the Wind Fish.

The Legend of Zelda: Skyward Sword

Link is the main protagonist of The Legend of Zelda: Skyward Sword. He does not appear in any other Zelda games.

Episode 1: The Start of a Legend

The Legend of Zelda: Phantom Hourglass

Link returns from The Wind Waker and continues his adventure with Tetra and co.

Link is one of the playable protagonists in The Subspace Emissary of Super Smash Bros. Brawl.

Toon Link, a separate incarnation, also appears in the post-game as an unlockable character.

These two versions, based off of the Twilight Princess and Wind Waker incarnations are considered non-canon.

Link is the protagonist of The Legend of Zelda: Four Swords Adventures. The game takes place in the "Child Timeline". This is the third distinct Link in this timeline, following the Link in Majora's Mask and the Link in Twilight Princess.[2]

By the end of the Let's Play, the Four Sword was laid to rest again, but Blue Link became the one Link instead of Green Link.

The Legend of Zelda: Tri-Force Heroes

The Legend of Zelda: A Link to the Past

Link is the protagonist of The Legend of Zelda: A Link to the Past, which is set before Link's Awakening DX and features the same incarnation of Link.

Link is a minor character in Super Mario RPG: Legend of the Seven Stars. He is considered to be the same incarnation that appears in A Link to the Past, Oracle of Seasons, Oracle of Ages, and Link's Awakening. 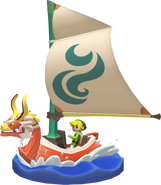 Link's sailing model in The Legend of Zelda: The Wind Waker

Link's model in The Legend of Zelda: Majora's Mask

Link's sprite in The Legend of Zelda: Link's Awakening DX