5 (in all crossover let’s play)

King Dedede is a main character in the Kirby series. He appears as a boss in Kirby's Epic Yarn and a supporting character in Kirby: Triple Deluxe.

Dedede is one of the main playable protagonists in Kirby's Return to Dreamland, as well as The Subspace Emissary in Super Smash Bros. Brawl.

He serves as the 6th boss of the game, in Snow Land.

In the game's opening sequence, King Dedede and his Waddle Dee royal guard are ambushed by the mysterious figure known as Taranza. Dedede is kidnapped up into the heights of Floralia, and Kirby (Emile) sets out on a new adventure to rescue his frenemy.

In Lollipop Land - Stage 1, Chugga shows off how Rock Kirby can turn into a statue featuring King Dedede, Meta Knight, and Bandana Waddle Dee -- his partners from Return to Dreamland.

Back in the main story, Dedede continues to be in the clutches of Taranza. Kirby confronts Taranza but he escapes after summoning Paintra to battle Kirby.

King Dedede was one of the main protagonists of Kirby's Return to Dreamland, alongside Kirby and Meta Knight. Dedede was controlled by NintendoCapriSun in the collab.

King Dedede is a playable protagonist during The Subspace Emissary of Super Smash Bros. Brawl, playing a rather major role during the adventure. 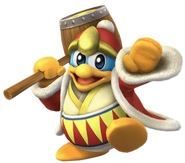 King Dedede and his Waddle Dees being ambushed by Taranza in the opening of Kirby: Triple Deluxe
Add a photo to this gallery

Retrieved from "https://emile.fandom.com/wiki/King_Dedede?oldid=42559"
Community content is available under CC-BY-SA unless otherwise noted.