King Boo is the main antagonist.

In the secret exit of the "Vanishing Ghost House" stage, a likeness of King Boo and Luigi could be seen. This foreshadows the eventually rematch he and Luigi have in Dark Moon.

King Boo appears fir the first time in a Mario Party game as the owner of his own board:

King Boo once again is the main antagonist. 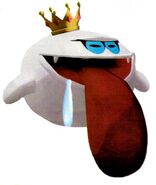 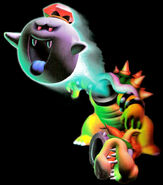 Official artwork of King Boo and Luigi for Luigi's Mansion: Dark Moon
Add a photo to this gallery

Retrieved from "https://emile.fandom.com/wiki/King_Boo?oldid=39503"
Community content is available under CC-BY-SA unless otherwise noted.