Bandana Waddle Dee is a playable protagonist in Kirby's Return to Dreamland, and a supporting character in Kirby: Triple Deluxe.

Though Waddle Dee is playable, he was only controlled sparingly.

While Kirby (Emile), Meta Knight (Jon), and King Dedede (Tim) were swimming underwater, they came across a switch that could only be reached with a spear. Meta Knight left and Bandana Waddle Dee (Jon) appeared. Bandana Dee used his spear to hit the switch and then swapped out with Meta Knight again.

In Fine Fields - Stage 4, Bandana Dee lends Kirby a hand and gives him some supplies and a keychain from StreetPass, just before Kirby goes to battle Hornhead.

As Kirby is taking on the EX Stage of Fine Fields, Bandana Waddle Dee gives him a hand along the way, with some supplies from StreetPass. With that help, Kirby then defeats the Mid-Boss Blocky DX.

Kirby then moves on into the second floating island, Lollipop Land, and takes on the first stage. Bandana Waddle Dee once again lends a hand with some supplies. Chuggaa also shows off how Rock Kirby can turn into a statue featuring Bandana Dee, King Dedede, and Meta Knight -- his partners from Return to Dreamland.

In Lollipop Land - Stage 4, Kirby discovers the Crash ability, and after accepting some helpful cherries from Bandana Waddle Dee, he obliterates a Gigant Edge in one attack with a Crash Supernova.

In Lollipop Land - Stage 6 EX, Fighter Kirby brawls his way through the stage and gets some relief with some ice cream before he battles Flame Galboros DX.

Episode 7: My Name is Mike Edit 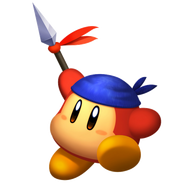 Bandana Waddle Dee's official artwork for Kirby's Return to Dreamland.
Add a photo to this gallery

Retrieved from "https://emile.fandom.com/wiki/Bandana_Waddle_Dee?oldid=39316"
Community content is available under CC-BY-SA unless otherwise noted.